The first documentary mention of the church dates from 1360. The church is dedicated to Saint Julien and Saint Basilissa, two eastern martyrs, which suggests that the religious foundation dates back to ancient times. Until the nineteenth century the church stood at the top of the hill, above the rest of the village, within the fortifications of the castrum. It was battered by all winds and foul weather, and became dangerous to worshippers. It was therefore pulled down around 1860, and rebuilt on its present site. With its tower surmounted by an iron bell frame, it stands proud against the sky. Within, the simplicity of the décor adds to the calm atmosphere of the place. Neo-gothic in style, with a single nave, a chancel, and side chapels making two transepts, the church contains several wooden statues from the seventeenth century, one of which represents Saint Agatha, the patron saint of the village.
The chapel in the south transept, to the right of the altar, contains a statue of

The church is open every day: opening hours are the same as the audio-visuel space Achille Mir. 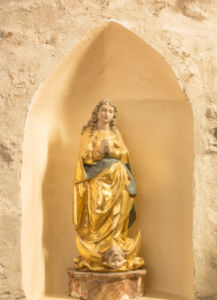 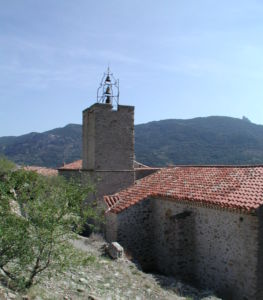