Many, if not most, French people remember the Cucugnan of Alphonse Daudet.  The only village in France named Cucugnan is indeed here in the Aude, a stone’s throw from the Pyrennées Orientales.  It is the cradle of the famous tale found in  Daudet’s “Letters from my Windmill”.

Cucugnan is first mentioned in 951.  From the twelfth century a fortified village or “castrum” grew up around the feudal lord’s castle which stood right at the summit of the present village.  During the Albigensian crusade, the lord of Cucugnan first supported the southern lords, and then submitted to Saint Louis (King Louis XI ) in 1241.  In 1495 Cucugnan was destroyed by the Spanish.  A new village was built below the ruins of the medieval village.  In the nineteenth  century the village became prosperous with the increase of the vines.  After suffering through the critical years which shook the wine industry in the early years of the twentieth century, Cucugnan now thrives from wine and tourism.

Come and wander through the village, and view its  ancient fortifications,  its church, its windmill,   its Théatre Achille Mir and glimpse between the houses the wild  landscape of the Corbières Hills. 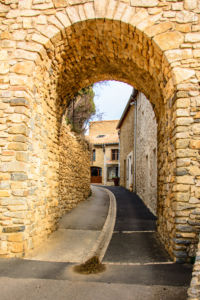