Faced with the wealthy and over-powerful Catholic church , of the eleventh and twelfth centuries, various religious movements emerged to preach that the clergy should be poor, just as Jesus and his disciples had been, and that the holy scriptures should be respected.
Catharism, which spread throughout Europe in the twelfth century, was based directly upon the gospels, especially the Gospel of Saint John, where, in Chapter 18, verse 36 reads “My kingdom is not of this world.”

Catharism was a branch of Christianity very different from Catholicism. . It attempted to solve the problem of the origin of evil : God, who is good, could not possibly be responsible for all the evil in the world : suffering, illness and death.
The Cathars therefore concluded that God, in His kingdom, had created souls, and the devil had created this earthly world. They imagined two creations : the one good, for the souls, and the other evil , the world of matter, of time and space. The fall of the souls into this world was explained to believers by Cathar teachers through tales and myths which helped them to understand the difficult concept. (See below)

For the Catholics, such ideas were heresy.A heresy which the Albigensian crusade and the Inquisition stamped out with fire and sword during the thirteenth century. the last Cathar heretic was burned early in the fourteenth century.

Sources written by the Cathars themselves are rare: a few apocryphal texts, a theological treatise entitled : “The Book of the Two Principles”, and a few rituals with details of rites and sacraments. Most of the sources are indirect : reports of interrogations of suspected heretics by the Inquisition and refutations of heretical doctrines written by Catholic clerics.

Extract of a Sermon by Peyre Authié, dated approximately 1300 :

Originally our Heavenly Father created all spirits and all souls abode with Him. Then the devil came to the gates of Heaven … But entered not for 1000 years … then he did enter by trickery, and once there, he persuaded the spirits and souls that if they would but follow him down into his world, he would give them great possessions : lands, vineyards, gold, wives and all the other good things of this visible world. Lured by his false words, the souls that were in Heaven followed the devil and fell from Heaven. The Heavenly Father rose from His throne and set His foot on the hole through which the souls had fallen. But the souls, having come down to Earth, remembered the good things that they had lost, and saw the evil that they had found … One of them said to the devil : ‘Why have you deceived us ? You have gained nothing, for we will all return unto Heaven.’ The devil replied that they would not return unto Heaven, for he would make them tunics that they could not take off, in which they would forget all the good and the bliss that they had enjoyed in Heaven.

« These tunics are our bodies. Such is the human condition : the soul is imprisoned in the body.»
Jean Duvernois . La religion des Cathares. 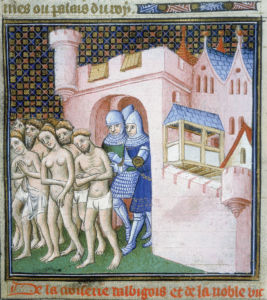 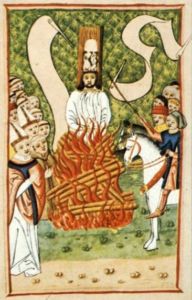 
Anne Brenon, author and expert on the Middle Ages, is one of the founders of the Center for Cathar Studies and of the revue  Heresis. She is particularly well-known for her work on the leading Cathars, which were the subject of several of her books, one of which is entitled: Les Femmes cathares.