THE NATURAL WORD OF CUCUGNAN AND ITS ENVIRONS

The quaint village of Cucugnan stands upon a hill in a valley between two long limestone ridges. The whole area of the Corbières range was formed in folds, like a crumpled cloth, when the Pyrenees pushed their way upwards, creating a series of long ridges and valleys.
Around Cucugnan, agriculture basically means vines, and today 90% of local vines are organically grown. Since the 1970s the extent of the vines has diminished and now the abandoned vineyards feed flocks of sheep.
The limestone ridges to the north and to the south of Cucugnan create a wild, dramatic backdrop to the village.A closer look at the upper slopes reveals numerous abandoned terraced vineyards – proof of the immense labour of the winegrowers in building up their drystone retaining walls, in an era when every inch gained was precious.
Now it is wild country, given over to the wind and the invading plants – “garrigue” country , where grow evergreen oak, box, buplèvre (bupleurum bushes), juniper, rosemary and thyme. It is home to wild boar, partridges, hares, foxes, and, soaring above, the great eagles.
Every spring the village is invaded by swallows and house-martins returning to their nests under the eaves, and every evening sees their graceful ballet in the sky, as they search for insects.
QuéribusCastle, three kilometres from Cucugnan, stands on a crag of the ridge to the south of the village.

The village and its environs have been listed since 1969. Three “nature zones” are registered as being of ecological interest, listing rare species of flora and fauna. 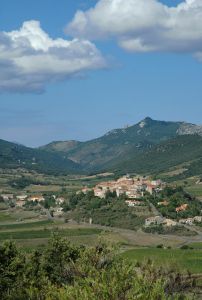 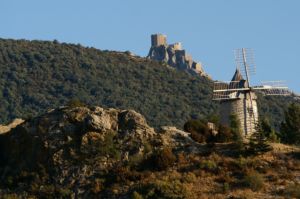