Queribus castle and his history 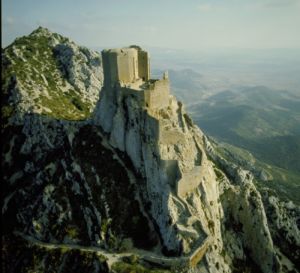 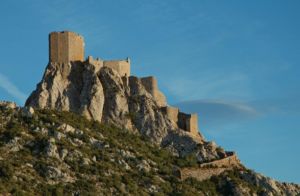 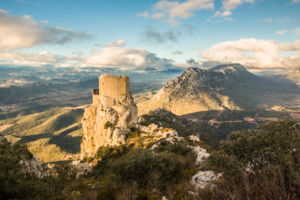 Queribus Castle (Popia Cherbucio) is first mentioned in 1020 in the last will and testament of  Taillefer, Count of Besalu. In 1111, the county of Besalu  came under the feudal lordship of the Count of Barcelona, who became King of Aragon (a kingdom in the north east of modern Spain) in 1162. Queribus thus became a frontier fortress guarding Aragon from the north.

During the crusade against the Cathars, or Albigensians, the castle became a refuge for some leading Cathars; Benoit de Termes , for instance,who was Cathar Deacon of Razes, stayed  there and eventually  died there in 1241.Queribus was the last bastion to fall into the hands of the northern French crusaders in 1255. Its final defence was led by Chabert de Barbara.The castle was then absorbed into the kingdom of France in the reign of St. Louis.

In 1258 the Treaty of Corbeil settled the frontier between France and Aragon to the south of the Corbières hills, within sight of Queribus. The castle then became a key element in the French defensive system based upon Carcassonne.It was one of the Five Sons of Carcassonne, along with Aguilar, Peyrepertuse, Puilaurens and Termes.

The castle was rebuilt and enlarged by the French kings of the late 13th and 14th centuries, but later it lost its strategic importance  in 1659, when the Treaty of the Pyrenees set the new frontier between France and Spain where it is now.

Perched on its precipitous crag, 728 meters high, Queribus looks out over the Corbières hills, the Fenouillèdes to the west, and the plain of the Roussillon.

Three perimeter walls, rising in level, defend the keep. Differences in the stonework, and in the openings, reveal the different dates of their construction. Four centuries of military architecture separate the original narrow arrowslits from the wider loopholes designed for cannon and other firearms.

The approaches are controlled by the defensive positions above. The principal gateways are defended by murder holes and projecting turrets or sheltered sentry platforms. Vulnerable points of the perimeter walls are overlooked by battlemented walkways or fortified firing positions. Only fifteen or twenty soldiers guarded against the frontier. 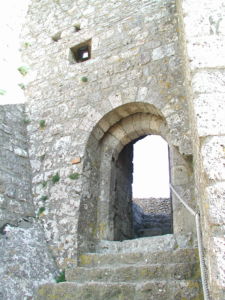 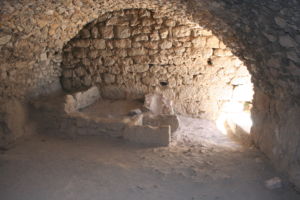 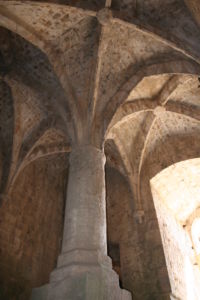 At the highest point of the third, topmost, level, the polygonal keep dominates the whole edifice. An immense renaissance-style window gives light to a gothic hall of double height which was once divided into cellar and main hall. On the western wall, the site of the chimney hood of the former fireplace is still visible.  The arched vault is supported by a massive pillar, off-centre. This vault supports the lookout platform , the flat roof of the keep, which may be reached by a spiral stair in a tower built onto the side of the keep.

From this summit point, the view extends from the Mediterranean  Sea to the Pyrenees and the Corbières.

Beneath the great window, the arrowslits and the smaller stones in the outer wall suggest that the lower part of the keep may well predate the twelfth century.

Queribus has been listed as a historical monument since 1907.Restoration work has been going on for more than ten years : to maintain and consolidate the structure and to reconstruct certain architectural features.